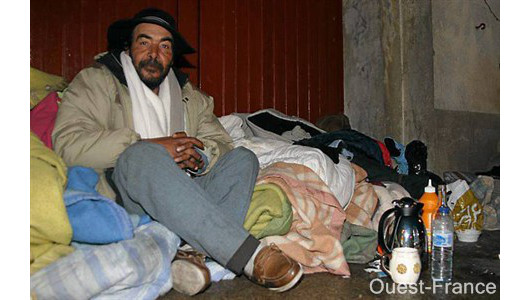 The three of us (Hubert, Laurie and Dan) walked half way up the stairs. In our backpack were some turkey and cheese sandwiches, a thermos of warm soup, some plastic bowls, spoons and some fruit. The stairs led up the side of a church where handfuls of blankets lay in disarray, Omar and Abdel lay amongst them, struggling to talk almost as much as we struggled to understand them. A third friend came up on the left and sat down on a chair poised on the stoop. We asked if they'd like some warm soup. "And some coffee?" Omar added. Sorry, we don't have coffee, but we have some soup and sandwiches we'd like to share. We stepped forward and Hubert rustled in his backpack.

Abdel started mumbling unwanted commentary and his seated friend shouted at him in crude terms. Two of them accepted the soup, which was still piping hot. They refused the spoons, preferring to sip directly from the bowls. We poured ourselves some bowls too and asked how long they'd been in Rennes. Abdel got up and refused the food, mumbling back at the others. Omar started yelling, "You're jealous of me! You're jealous!" Apparently he'd been interviewed by someone from the local paper, and was quite proud of the write-up and photo that appeared. He said he was a star, and his friend was jealous. This same exchange was shouted a number of times. Their angry shouts were never directed toward us, in fact they seemed genuinely thankful and courteous. Omar started unraveling his story, which started with serving in the Army in Algeria. Abdel stumbled down the stairs to buy another bottle of whiskey. Omar carried on about how he used to steal medicine from pharmacies and give them to his neighbors, about having one of his toes amputated at a local clinic, all the while sipping from a bottle of white wine. We listened. We tried to understand. They accepted the sandwiches, setting them aside for another time. They kept all the fruit, though they couldn't eat the apples because of problems with their teeth. I wondered what they eat all the other nights we don't come, where Abdel gets the money to buy whiskey, and how they retain any warmth sitting on that cold cement stoop. I was standing with my toes over the edge of the gulf that separates our lives. All I could do was pray. It's easy to be overwhelmed by the needs around us. I'm not against random acts of kindness, but I'd prefer intentional acts of kindness. At least Omar had a warm bowl of soup last night, and someone willing to listen to his story. Beyond that, let's just pray the the Lord's compassionate, all understanding and wise hand reaches out to bless him as only He can.