2019 Newsletters
UN
CONNECTING WITH THE DIVINE

My first video was for the everystudent.com article Connecting With the Divine. It has an overview of five of the world's major religions, discussing their differences and ultimately explaining the core of Christianity. 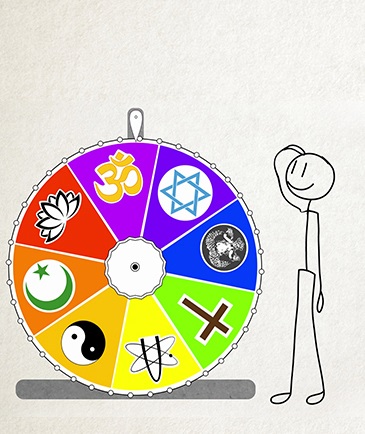 A fundamental article which most countries have, it is a good test for creating videos that translate easily. The video has a stick character who could be anyone. They approach a sort of game wheel with different religious symbols on it, and spin the wheel. The question the narrator asks is - how can we sift through all these religions to find one that works in our life? The viewer is invited to check out the article. Finally ready in November, I posted both an English and French version to Facebook. The videos have about 1500 views, which is a function of it being shared/re-posted and paid ad campaigns. For the French one, I paid a modest 10 euros, which allowed me to learn some interesting things. For example, about one in every five people who watch the video will click to the article. That's encouraging! I hope to receive translated audio from other countries so the video can be used even more broadly. I learned a ton creating this first video, from working with a client to how the different software connect in the workflow. I can find my way around five new programs and understand the fundamentals of animation. Even though I've barely scratched the surface, a whole world of possibility is opening up. I'm looking forward to creating more videos that point people to the good news of Christ!

A passel of creative artists + blank paper over the tables + a healthy supply of markers = lots and lots of doodles! I spent a week in Chicago to meet Cru's Creative 1 media team. These are 46 staff who work in the creative arts primarily for campus ministry. One of them, Jesse Rogers, studied animation in college and has already been regularly connecting to coach me in the animation process. I am very thankful for the encouragement and support Jesse has given, and I'm hoping that some of the additional connections with this team will prove helpful. Scriptwriters, illustrators, videographers, photographers, graphics designers and animators are great to know! Since Agapé France doesn't have anyone working in the field of creative arts, besides me, I'm longing for the spurring on that comes from teamwork and the candor of the critical eye of others. But let's take a look at the name Creative 1, a nod to the One who is the origin of all things creative. This time of year it is a joy to see the colors the Creative One paints with the trees turning color and pink sunsets on blue skies. God is at the origin of all creativity! Why is it easier to think of him as originator than as artist - creator? Yet any close look at flowers or the dazzling colors of fish in the sea should remind us that God is a master artist. I am thankful to be living in this masterpiece. He is the true creative one.